This project was initially designed for third-graders who were studying Japan in their Social Studies classes, but these puppets are not intended to duplicate any kind of Japanese puppet.  Rather, they are similar in concept to the puppets used in Bunraku and other Japanese "doll theatres."  They are incredibly simplified compared to these puppets, which can take a lifetime to learn to make, but they allow students to begin to understand some of the ideas of this kind of puppetry.  Central to the project is the fact that, as in Bunraku, the puppeteers are always plainly visible--indeed, as a friend of mine put it, in a way the puppeteer is the puppet.  Also important is the idea of creating a puppet whose character is clearly delineated by its dress and apppearance.  I usually show my students lots of pictures of Bunraku puppetry before we begin, but they are not required to try and make their puppets "look like" the puppets in the pictures.  (Although I see no reason you couldn't do that if you wanted to.)  Rather, they are asked to imitate the level of detail (many students refuse to believe, at first, that they are looking at puppets rather than real people) and the way that the puppets' dress and appearance define them.  When it comes time to manipulate the puppets, we again imitate concept rather than actual story.  Instead of acting out "Japanese" stories with the puppets, we concentrate on making the movements of the puppets lifelike, on convincing interaction between puppets, and on the way that the body of the puppeteer reflects the affect of the puppet.

A printout of the two templates below (or just draw your own).

Print these as close to 8.5x11 as your printer will let you.  Print or photocopy on heavy card stock enough for everyone to have one "torso/arms" sheet and every two people can share one "legs" sheet.  (I usually cut the "legs" sheets in half ahead of time to avoid acrimony.) 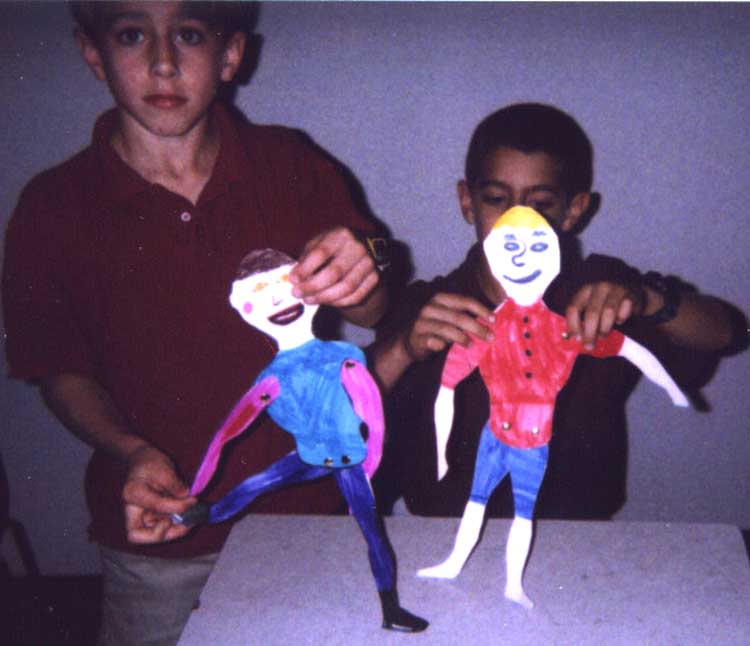 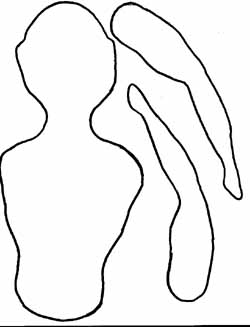 Each student gets one torso, two arms, and two legs (naturally).  Do not cut them out right away!.  The decorating comes first, for reasons that will become clear.  Set out markers or crayons, etc.

The idea is to decorate the puppets so that they represent clear characters.  I usually say something like, "When you look at a real person, you usually can't tell from the way he's dressed or the way his face looks what kind of person he is--other than obvious things like recognizing a cop from his uniform.  But you should be able to tell by looking at your puppet who he is and what he is like.

This puppet, made by a student who really understood the assignment, is meant to be Bill Gates.  He knew perfectly well that Gates didn't really wear backwards suspenders, carry banknotes all over his person, or wear a monocle.  But he felt that these details expressed the essential geekdom, wealth, and influence he wanted to convey.

We look at pictures of Japanese puppets to get an idea of the level of detail attained, but don't necessarily try to imitate them.

The puppets as drawn on the templates are more-or-less naked (or at any rate in form-fitting clothes).  Some students will want to draw clothing on them that goes "outside the lines."  This is perfectly okay.  (Equally, one can make a character who is thinner or fatter than the template.)  That's why we don't cut them out until after they are decorated.  (Plus, that way they students don't get as much ink on their desks.)

When the decorating is complete (which should take quite a while, if the students are serious about the details), cut out the puppets carefully.

Using a paper punch, make four holes in the torso--two shoulders and two hips--and corresponding holes in the arms and legs.

Using brass fasteners, attach the arms and legs.  For the most part it works best to put the legs behind the torso and the arms in front of it.  That way the legs look more natural, and the arms can move in front of the body.  Sometimes a student will have a specific reason for doing it the other way.  (A character who is a ballet dancer looks better with the legs in front, and one of my students once made a burglar, and wanted him to be able to put his hands behind his back for handcuffs.)  That's perfectly okay.  One of the things I like about this project is the creative ideas it stimulates.

Occasionally students want to put elbows or knees on their puppets.  I generally allow this, after pointing out that it makes the arms or legs a little shorter than they "should" be.  (If you wanted to, you could of course design templates that allowed for this.  The reason mine don't is that with only one puppeteer, four joints are about all they can reasonably handle.)

Real Bunraku puppeteers spend years learning their craft.  They use their whole bodies to manipulate their puppets.  Obviously we can't really approach this level of skill in a single drama lesson.  But my students are usually able to get facile enough with these enormously simplified puppets to make them move fairly naturally, and interact with each other.  I stress that, as in Japanese puppetry, there is no need to hide the presence of the puppeteer.  Rather than putting handles or something on the backs of the puppets, I demonstrate manipulating the puppets by simply moving their various parts with my hands, in plain sight.  The children quickly perceive that they are able, as audience, to watch the puppets while ignoring my hands, and after that they have no difficulty doing it themselves.  Since these puppets are mostly about moving bodies rather than talking, we do mostly "pantomime" stories.  One student might narrate a familiar story, while two or three others' puppets "act it out."  Try to leave time for the manipulation, or the lesson becomes simply an arts-and-crafts project.  (Nothing inherently wrong with that, but if you're the drama teacher, you want to go beyond it.)